What do you mean you don’t check the government’s statistical publication lists every few days? Well, you should be glad I do!

I was having a quick check through the most recent quarterly benefit summary release (as you do) and was reminded of an odd fact. Currently (well, August 2017- the closest we have to currently), about two thirds of people who receive Employment and Support Allowance (ESA) are in what is known as the support group, with 17% in the work related activity group (WRAG). I’m going to argue that this is pretty telling about decision making- I’ll explain why in a minute, but perhaps first I should remind everyone what I’m talking about.

[Skip to “Now, here” if you’re already more aware of ESA than you’d like to be]

Employment and Support Allowance tries to separate out claimants into three groups based on their symptoms:

There are different rates of payment between the bottom two groups, whereas the only option to stay on ESA for first time claimants put in the first group is an appeal, which whilst it is going through the motions comes with a rate of pay equal to jobseeker’s allowance.

People who made a new claim, or people who had made an appeal and were waiting for it to be heard were bundled together into something called the ‘assessment phase’, a sort of limbo where they waited for an outcome.

ESA has changed significantly, mostly via a series of incremental tweaks, in the 10 years it has been up and running, but these points have stayed the same.

Now, here (to me at least) is the interesting bit. When the government originally created ESA it thought that the number of claimants in the work related activity would be higher than the number in the support group. I’ll put that another way, the work related activity group was going to be the main group, with the support group being just for the smaller number who were too unwell to engage in classes and tutoring to get people closer to the labour market. The focus of policy making, the thing that made ESA different from the previous sickness benefits was this group.

Here’s what the explanatory memorandum to the legislation said:

I’ve had a little play on stat-xplore to show what actually happened- here are my sheets, which is all derived from the stat-xplore info. 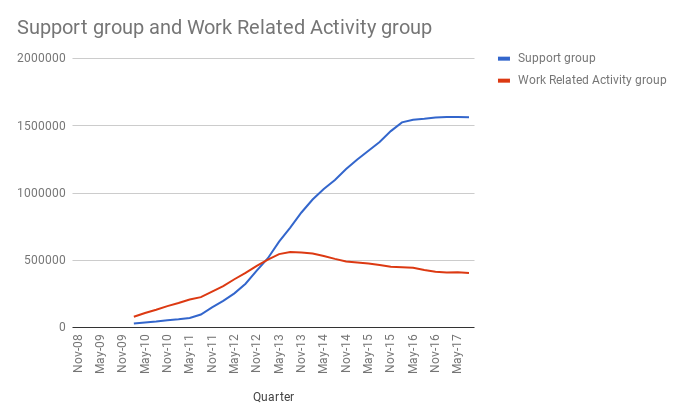 Reliable information started coming out from early 2010. To begin with there were more people in the work related activity group, but the numbers placed into the support group started soaring through 2011 all the way up to late 2015 where, potentially as a result of the number of migrations moving to a trickle, it has now plateaued. The numbers in the work related activity group rise at first, but have been on a slight downward trend since the middle of 2013.

If you look at the total caseload stacked together we can see that the growth of the support group really underpins the whole of the benefit:

This isn’t what it was supposed to look like. But what can be the cause of it?

This issue was actually flagged in the Year 5 independent review of the benefit from Dr Paul Litchfield. He was particularly interested in the number of young people coming forward with very high mental health needs, a situation he accepts ESA results will only reflect rather than necessarily being able to solve.

Following his report the government looked at the data. Their view was that a big part of the issue related to the widening of who was included in the support group. By incremental changes the scope of the support group has widened, but it still does not cover the vast majority of illnesses and disabilities people have when they claim a benefit.

A second issue pointed to by the government was due to the delays in assessments. The government got into a hole where they couldn’t process claims fast enough (this is an understatement), leading to claimants being in the assessment phase for far longer than originally planned. According to the government, many claims were closed in this period (ie. the people got better or stopped sending in sicknotes) which they believed was skewed towards claimantrs who would have failed the ESA. I don’t know on what evidential basis they have decided this- almost all welfare rights professionals I know have seen claimants with very strong cases having claims closed on them.

Finally and in connection with the delays, the government claimed that to clear the backlog they were making decisions on paper in some cases. Where this happened, the only things they could decide was to put someone in the support group or to let their claim continue on to a full assessment. The argument was that this inflates the proportional size of the support group whilst those who will eventually end up in the work related activity group linger in the assessment phase.

I’m not saying that any of these responses is inaccurate, but they don’t seem to capture the issue fully. The second and third issues relate to delays in assessment and we are not quite in the same place with this anymore. So if the delays and paper processing aren’t happening at the same rate, why are double the number of assessments leading to the support group than to the work related activity group- a circumstance the DWP’s own explanatory notes state is stabilising?

There are other possible explanations and I’m not surprised that the government aren’t dwelling on them. The first possibility is that the scheme was, or has become, badly designed for the purpose it was intending. I’ll put that another way- whilst the intention was for a majority of people to end up in the work related activity group, the actual scheme didn’t achieve this. Many claimants may have been more afflicted than was predicted- people had symptoms that placed them in the support group. Alternatively, and especially with the medical descriptors (the points-based test most claimants go through to quality for ESA) becoming harder over time, claimants who were originally envisaged to qualify for the benefit are turned down.

Another set of explanations relate to the application of the medical test by health care professionals and decision makers. We know that the majority of people who take their claim to appeal are successful. We know there are serious, long-lasting concerns about decision making and the medical assessments. I’d argue that a significant proportion of people turned down for ESA would, on balance (perhaps once they’ve sat down with a welf to talk it through), argue that they should be in the work related activity group. So is decision making part of the reason people aren’t getting into the work related activity group in the numbers originally predicted?

Finally, the government did change the rules for people receiving the contribution based ESA, in order to limit the amount of time they could claim it. I thought this might be part of the issue but when you look at it, the numbers receiving contribution based ESA have been fairly stable over a long period (this doesn’t mean it is the same people claiming) so it’s not quite clear if this is a factor.

Maybe there’s another way to put all this. The original intention of ESA was to figure out who could, with support, move more towards work and provide them with extra help. In one sense it doesn’t matter whether this is a majority of claimants or not. But what does matter is whether or not people receive support relevant to their needs.

At the start of the post I referred to the difference between the intention and reality as “telling”. What I mean is it looks exactly like restricted and temporary access to the work related activity group seems to be the outcome the system as a whole produces. Having people with health conditions claim jobseekers allowance with all the expectations that entails isn’t necessarily helpful. Similarly, putting people on a carousel of assessment, reassessment and appeals isn’t helpful either.

So a system operating (by design or implementation) to exclude marginal cases means a significant skew towards those cases where there is no argument. A system intended to help people get closer to employment doesn’t work if it excludes precisely those people who would benefit most. I’d argue that’s exactly what we are seeing and that these statistics are just further evidence that something has gone very wrong with ESA.